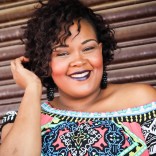 Ebonie Bennett aka Miss Pinky, a native of Little Rock Arkansas, have been performing since the young age of seven at school and church.

She is a gifted singer, poet, host, actress, and model, just to name a few who has performed in Hollywood, Miami, New Orleans, Houston, and many other cities Throughout the United States. Performing original poetry, Ebonie is known for being Lyrically Intoxicating. She has opened for several nationally known artists such as Tyrese, Comedian Joe Torry, Black Sheep, Pimp C, Biz Markie, Charlie Boy, Chrisette Michelle, Marsha Ambrosius, Sinbad, and many more. Being an actress, Ebonie has performed in several plays such as Hip Hop Project, An Evolution Of Music, Poetry is my Lyfe Revenge is my Mission and others.

When it comes to singing, her sultry voice and captivating personality, definitely lets you know she’s no stranger to the mic. After forming her own band ‘PiNk IcE” Ebonie performed in several local venues in Arkansas. Also, local venues in Houston and surrounding areas.
Coupling acting, singing, and dancing Ebonie performed the role of Etta James, Chaka Khan, Pointer Sisters, Tammi Terrell, and more in the Motown revue in Houston, Texas for three years singing before an audience of 40,000 + and sung on local news stations such as ABC, Fox, Great Day Houston, and Newsfix. Ebonie is also a leading character in the new TV Series Bayou City Kings.

Ebonie Bennett is no stranger to the runway she has modeled in the BIG GIRLS ROCK 2 fashion show, LS1426, Curve Nation Expo in Orlando, Florida ,FULL FIGURED FASHION WEEK 2014 and 2015 in New York, as well as Ashley Stewart Love Your Curves Tour Houston. Ebonie has been featured in Several blogs and Magazines such as Pose Magazine September 2014 Issue, and Phat Girl Fresh just to name a few.

Words from Ebonie Bennett: I will always keep God 1st, he is the reason why I’ve been anointed and appointed to do great things, because of him I have Purpose. I will always remain humble because the quality of humility is PRICELESS. Ebonie is Grateful for her family, friends, fans, and her son who is the light of her life. Her slogan is “ TREAT EVERY MOMENT LIKE ITS MY LAST”.

Curvy Cutie: Gigi Marie Talks About Knowing Your Body, Dieting, and What It Takes to Make It In The Industry